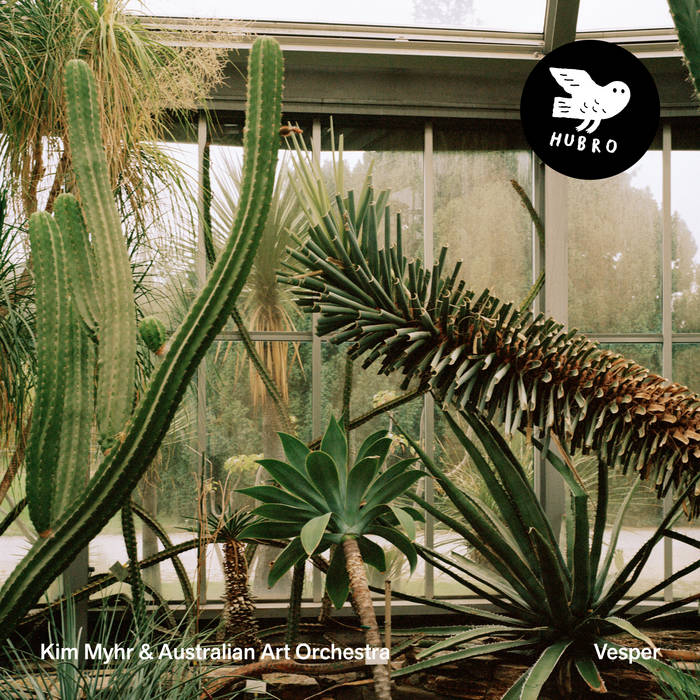 Lars Gotrich Night music for insomniacs and sleepwalkers, illuminating wonder and terror in slowly shifting strings. Calls to mind Talk Talk's 'Laughing Stock' as the Norwegian guitarist journeys through the dark. Favorite track: Part One: I caught a glimpse of the sea through the leafy boughs of the pines.

kralin A shimmering delight throughout. Buy everything you can get your hands on (or download) by Kim Myhr. As well as the very strong Hubro material 'All Your Limbs Singing', on Sofa, is well-worth seeking out.

Recorded live as part of the Melbourne International Jazz Festival in June 2018, 'Vesper' is guitarist/composer Kim Myhr’s collaboration with the world-renowned Australian Art Orchestra, led by Peter Knight. A long-form, immersive work consisting of three movements that add up to a combined running time of just under one hour, it further demonstrates Myhr’s masterly command of complex musical resources and extended duration. ‘Vesper’ - which means “evening” in classical Latin - also reunites Myhr with drummer and percussionist Tony Buck, of Australia’s legendary improv trio The Necks. Buck was one of the three guest drummers featured on Myhr’s acclaimed Hubro recording ‘You | me’, shortlisted for the 2018 Nordic Music Prize alongside Bjork and Susanne Sundfør.

"I had been thinking for a while to do a night piece”, Kim Myhr says about the genesis of ‘Vesper'. "The music I’ve listened to the most, and which is perhaps the closest to me, is the music that I listen to in the hour before going to bed, when the tempo is a bit slower, and the expectations of the day are fading. Daniel Lanois talked about how they recorded Bob Dylan’s 'Oh Mercy' only in the night-time, because musicians tend to be more patient and relaxed then, and even play a few bpms slower. Although this is a nice idea, I was more focused on the music itself rather than the methodology. What interested me was the private spaces of night time, when the listener knows that nothing more will happen for the rest of the day. It’s an embracing and immersive space, where we can be at our most private and intimate.”

The music for ‘Vesper’ is embracing and immersive too, with an associative, dream-like quality that fits the night-time context to perfection. While each of the three movements could be said to follow its own internal logic and sense of development, capable of functioning as stand alone pieces if required, the overall span of the composition as a whole is suitably epic. The range of sounds is equally vast, from Kim Myhr’s own electric 12-string guitar with its special tunings, to the incredibly versatile resources of the ensemble - actually a septet for this date, but sounding far larger. Live instrumental parts for brass, woodwind, strings and percussion are complemented by re-processing from Joe Talia on Revox tape deck and electronics, with Peter Knight covering electronics and hammered dulcimer as well as trumpet. Combined with Tony Buck’s maelstrom of percussion, the overall effect is thrillingly intense, with each mounting climax coming close to a sensory overload, while quieter stretches can seem to roll by timelessly in a somnambulant haze.

The sounds also relate to the specifics of the setting for the performance, at Melbourne’s Substation; to the Orchestra itself, for whom the work was commissioned and written; and to Kim Myhr’s experience of Australia, where he has lived for extended periods.
“The nights portrayed in these three pieces are balmy and warm”, Myhr says of ‘Vesper'. “I have had a strong connection with Australia since 2007; I lived in Melbourne and Sydney for a while, and have kept returning every few years or so. When the Australian Art Orchestra approached me to do a piece, I thought about how my relationship to the place could be reflected in the music. It’s an intimate piece for me, connected to a specific part and time of my life.” Myhr also works with the Australian reeds player Jim Denley in the trio MURAL with percussionist Ingar Zach.

Like all of his recent work, from ‘In the end his voice will be the sound of paper’ for the Trondheim Jazz Orchestra in 2016, to ‘You | me’ - which has now been performed several times across Europe and North America - and the collaboration with poet/performer Caroline Bergval and Quatuor Bozzini on ‘passing clouds passing crowds’ from 2019 (all available on Hubro), ‘Vesper’ demonstrates Kim Myhr’s evolving interest in form. "Vesper turned out a little bit like a novel”, Myhr says, “In three parts, each with its own narrative and mood, and all happening in the absence of daylight”. There is even a literary quality to the titles for each movement: 'Part One: I caught a glimpse of the sea through the leafy boughs of the pines’;’Part Two: We seemed to grow more and more pensive, but in fact we were less and less’;’Part Three: no walls, no ceiling, no windows.'

"The first title is a quote from Bob Dylan’s 'Chronicles vol. 1', describing the experience of the 'Oh Mercy' recording sessions in New Orleans”, continues Myhr. "The second title is taken from Rene Daumal’s magical book ‘Mount Analogue’, which I discovered through the composer Francesco Messina’s delightful album 'Prati Bagnati del Monte Analogo’. It’s an unfinished novel about an expedition to Mount Analogue, the highest mountain in the world. The section where the mountaineers overlook the wet meadows of Mount Analogue in evening light, inspired Messina’s piece, and also inspired ‘Vesper'. The third title is from Rene Daumal’s book 'A night of serious drinking’.

The mixture of Dylan with Daumal (1908-1944) - a poet, translator and associate of Gurdjieff with an interest in Eastern Philosophy - provides a kind of metaphor for Kim Myhr’s own 12-string playing, which matches the inevitable folk-associations of the instrument with the drone-effects and harmonies he draws from his study of Indian and non-western sources. “I’m also interested in thick slabs of sound with lots of information in it and I think the 12-string guitar allows that complexity to happen”, Myhr told Australianjazz.net’s Nikos Fotakis in the run-up to the performance in Melbourne. “For this project, I wanted big masses of orchestral sound. There’s a lot of harmonic information, a lot of structural playing.”

As this album’s remarkable document of the festival performance at the Substation shows - recorded by Jem Savage, mastered by Joe Talia and produced by Kim Myhr - the Australian Art Orchestra respond to Myhr’s score heroically, taking full advantage of the improvisatory freedom the written structures allow. At times, eight players can sound more like eighty. ‘Vesper’ also consolidates Kim Myhr's reputation as one of the most interesting new voices in all contemporary music. Within that terra incognita where composition and improvisation are so entwined as to seem indivisible, he is close to unmatchable.

Kim wants especially to thank all the musicians of the Australian Art Orchestra for their wonderful musicianship and their lovely collaborative spirit during the week working together in Melbourne.
The composition work was supported by TONO and
Komponistenes Vederlagsfond. The development and
performance of the work was supported by Australia
Council for the Arts, Creative Victoria, and The Substation.

Bandcamp Daily  your guide to the world of Bandcamp